An online Club library with Book of the Month, book reviews, and a link to the Skipper’s Shelf where books will be free to access. 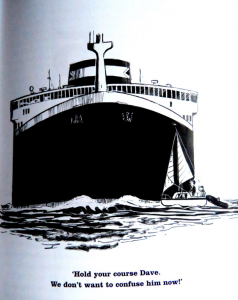 FROM THE SKIPPER’S SHELF

Click the book image on the right to access the link to the e-book version of this book.

Ernest Shackleton was one of the outstanding figures of early 20th century Antarctic exploration. This book recounts the survival efforts of Shackleton and his crew after their ship was destroyed by ice in the Antarctic Peninsula in 1914.  This book is the story of the James Caird, an unlikely hero, a 23-foot lifeboat that completed the most desperate and celebrated open boat voyage in history.

Six men sailed the Jim Caird in the winter of 1916, from Elephant Island, south of Cape Horn, to South Georgia, 800 miles through the gales and enormous seas of the Southern Ocean. Thanks to this great feat of seamanship (and the traversal on foot of the South Georgia snowfields and glaciers), Ernest Shackleton was able to rescue all 22 of his men on Elephant Island. This book features a rich selection of Frank Hurley’s miraculously preserved Endurance exhibition photographs and riveting accounts of the voyage from Shackleton and Frank Worsley, master navigator, who got them to South Georgia in atrocious conditions using a sextant and rare glimpses of the sun.  On board were Ernest Shackleton, Tom Crean and Frank Worsley, now some of the most recognised names in Antarctic and Polar literature/history.

This is the story of that little boat from its commissioning by Worsley to its dramatic escape from Antarctica to its final resting place at Dulwich College in the UK.  Shackleton’s Boat is a worthy memorial to a vessel famous in maritime history, and a story whose heroism has inspired generations.

Check out below our upcoming list of books now available

Two Years Before the Mast

MMYC and Armchair Sailor say thanks to…